A downloadable PEUVR for Windows

The enemies have top hats and are trying to explode at your core because it's nice and red and they don't like that.

While not planning on joining the Ludum Dare, I started working on a little gameconcept on Saturday and ended up putting quite some time into it. So, as it fit perfectly with the LD37 timeframe I decided to join that, as the 'Room' theme also sort-of fit with what I was trying to make.

Not having prepared for the Ludum Dare at all, the game has practically no art nor sound - It's really just a concept. Also, I haven't had the chance to try it out. Yes, I made a VR game without having VR equipment nearby so I don't have a clue whether it works!

I am quite happy with it though, quite certain it could be fun if I tweak it right (but I will need access to some VR equipment to do that). So feel free to try it out, you might even get to try it before I can c':

The PC version is just the debug-version I've been playing around with. It's probably rather difficult to hit enemies as you have to fly around like crazy to hit them. Anyway, let's just hope the VR version is fun!

Edit: I managed to try it out on the Vive, and after fixing some buttons and slight issues, I'm very happy with it! :D

Managed to playtest it with a couple of fellow gamedevelopers and they seemed to enjoy it too, although I would advise keeping your distance from anyone trying it out C':

Unpack it using Winrar or 7zip or some other unpackaging software 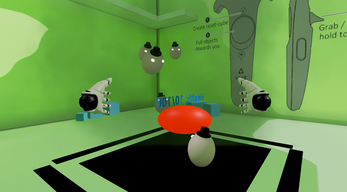 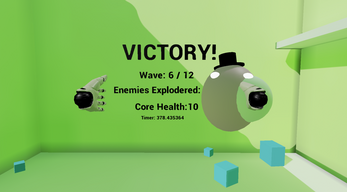